Our blog aims to provide you with inspiration, practical advice and case studies to help you grow your corporate partnerships.

If you have any feedback, questions or suggestions for topics you want us to blog about please get in touch. We would love to hear from you.

Changing Faces and The Telegraph

Two-fifths of people with a visible difference can’t remember when they last saw someone who looks like them positively represented in a newspaper. Changing Faces decided to pitch to be the Telegraph’s Christmas Appeal partner. In their pitch they showcased the Telegraph’s industry-leading work on diversity. Also their Champion Rory, who has a visible difference, spoke powerfully about his personal experiences of harassment. He brought a room of journalists to a complete standstill. The Editor Emeritus said it was the best pitch that they’d ever seen. Changing Faces won the partnership and raised over £140,000.

A member of Sue Ryder’s retail team noticed a poster advertising refurbished washing machines. The refurbishments were part of a prison training programme organised by DHL Envirosolutions. Sue Ryder has over 450 shops, so they realised this could be a huge opportunity to sell second hand white goods in their large format shops. Sue Ryder took the initiative and called DHL the next day. Four months later they signed a partnership agreement with a potential annual value of £500,000. 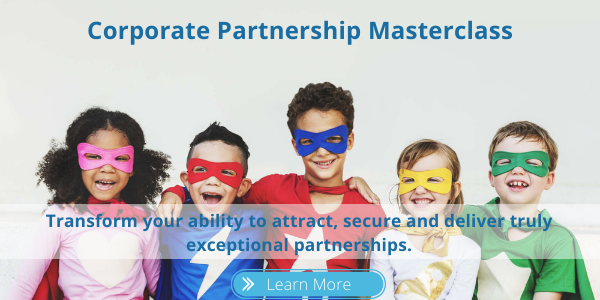 In 2014 Children 1st was put forward to be the charity partner for Skyscanner, whose HQ is just five minutes’ walk from the charity. They worked hard to tailor their pitch to the company, matching their language, demonstrating their shared values and connecting with their employees. Children 1st won the partnership which raised £60k and won an award for Best Charity & Corporate Partnership.

Macmillan decided to make their partnership with M&S worthy of the World’s Biggest Coffee Morning. They wanted to move the partnership from M&S Cafe, to M&S Food. They engaged the senior people at M&S to sell them the idea, and the benefits for them as a business. And they really prepared for negotiations. The result is M&S are now headline sponsor of the World’s Biggest Coffee Morning, which generates around £3.5million a year.

PTH was spending considerable money on fuel and vehicles for hospice care at home. They decided to approach Bridges, a local estate agent, with the opportunity to provide vehicles with joint branding. The key moment of the pitch was when Georgi shared her personal story. This was the start of a long-term partnership between PTH and Bridges which has raised over £100k.

Airbnb launched their ‘Social Impact Experiences’ initiative, providing a free promotional platform for charities wishing to offer visits to their project work to the Airbnb public. The most popular of these experiences involve animals. GFAS contacted Airbnb, after a public query suggested they might not have a strong regulation process for animal experiences. They used this as a reason to get in touch. GFAS’s CEO called Airbnb’s Head of Policy and Risk. This one phone call began a brilliant, strategic partnership.

When Parkinson’s UK pitched to Credit Suisse, they were told by the charity committee that funding research is often perceived as lab coats, microscopes and petri dishes – a bit dull basically. So they set about humanising a research project and created ‘Don’t walk away from Roger’ campaign. It told the story of Roger who suffered from Parkinson’s Dementia from the view of his wife, Vivian. She gave a truly hard-hitting insight into what it’s like to live with Parkinson’s. They won the partnership, raising £1.2m, and Rogers’ story was undoubtedly at the heart of this success.

SHS recognised that 2016 would mark the five-year anniversary of their partnership with Liberum. The partnership was starting to feel tired and they wanted to make it exciting again. So they hatched a plan with their fellow ‘anchor charity’, St Giles Trust, and created a framed picture to demonstrate the combined impact Liberum employees had made on the two charities. This surprise recognition was very well received and took the partnership to another level, securing a Lord Mayor’s Dragon Award.

In 2005 Age Concern reviewed their partnership with Innocent, which was worth £20k at the time. It was quite a modest return for considerable effort. They decided to create a plan to grow it, so they called local Age Concerns to find out if they could knit more little woolly hats to go top of Innocent smoothies. They pitched the plan to Innocent and the partnership grew from £20,00 to 200,000 in just two years. It won Business in the Community Award for Cause Related Marketing and has now raised over £2million to help older people.

Action for Children and Byte Night

In 1998 Ken Deeks, managing director of Kaizo, approached Action for Children with the idea of uniting the IT industry to help prevent youth homelessness. He suggested organising a sleepout of senior IT executives to raise money. Action for Children said they would only partner with Ken if they could give him and his company benefits in return, because that would make his involvement sustainable. The sleep out is now called Byte Night and it has raised over £10million. Ken Deeks has been the driver of Byte Night for the last 21 years and in 2015 he was awarded the MBE for Services to Children.

Born Free received a call from Thomson Airways, who were concerned over complaints from customers seeing lions trapped in cages in a rooftop bar in Tenerife. Thomson needed their help. Born Free seized the opportunity to do something amazing and never done before. Together, they rescued the lions! The result was an incredible piece of positive PR and a new 15-year partnership with Thomson Airways worth approximately £150,000 a year.

Bonus example from the USA!

Are you ready to transform your organization and grow your corporate partnerships? Contact the Remarkable Partnership team to find out how to start.

5 Recommendations to seize opportunities in the crisis: Out of darkness cometh light

Do you want to create a Remarkable Partnership? Sign up for our newsletter and get our tips sheet on where to start!